Did you know maple syrup contains an abundant amount of naturally occurring minerals such as calcium, manganese, potassium and magnesium? And like broccoli and bananas, it’s a natural source of beneficial antioxidants.

Antioxidants have been shown to help prevent cancer, support the immune system, lower blood pressure and slow the effects of aging. Maple syrup is also a better source of some nutrients than apples, eggs or bread. It’s more nutritious than all other common sweeteners, contains one of the lowest calorie levels, and has been shown to have healthy glycemic qualities.

Maple syrup was the original natural sweetener. Native Peoples in North America were the first to recognize 100% pure maple syrup as a source of nutrition and energy. Since then, researchers have been documenting that maple syrup has a higher nutritional value than all other common sweeteners. In addition, researchers have found that pure maple syrup contains numerous phenolic compounds, commonly found in plants and in agricultural products such as blueberries, tea, red wine and flax-seed. Some of these compounds may benefit human health in significant ways.

So go ahead and satisfy that sweet tooth with something that not only tastes great…but is naturally good FOR you! 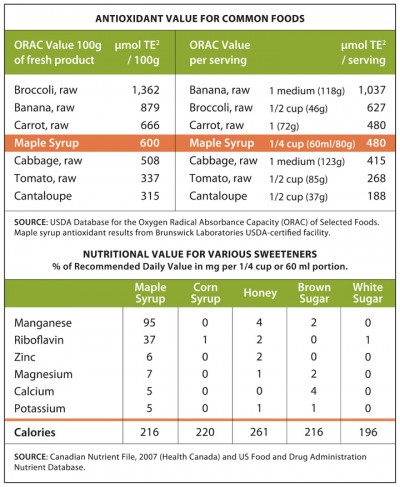